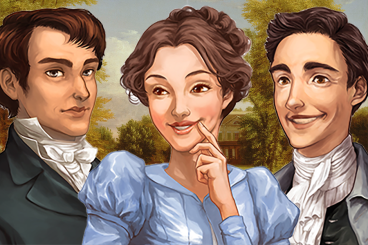 It’s England, 1810. You’re a young lady. You have to get married. So do the other ladies. The men may seem good, but they all have secrets. You can spend your time trying to find out more – but that might let another lady swoop in and snatch the man you really deserve. Relive the agony in The Jane Austen Game, available now at Game Crafter.

This game has an interesting history for me. The design was driven by a few nights I spent reading Pride and Prejudice. It hit me that the novel described a natural strategic tension that would make a good game. In game theoretic terms, the ladies in the novel face this tension that they have limited resources of family, networks, and especially time. Yet they have to leverage these resources in two very different directions. On the one hand, they have to do investigative work to figure out who these men really are. On the other, they are in a race to get a man before one of the other women does. The situation creates this awful risk, that you might jump too early on a bad guy or, what was worse in those times, that you might not get any guy at all. So I whipped up some mechanics and designed some cards. This would have been back in 2011 or 2012.

Oddly enough, these same dynamics were being worked on at the exact same time by at least two other people. In the same period that I was noodling on this game, Michael Chwe wrote and published Jane Austen, Game Theorist, where he does the heavy lifting in terms of describing the romantic situation in game theoretic terms. Academics were dismissive of this text, to say the least, but lots of Janeites were intrigued. It got a lot of press.

Then in the time period after I had essentially finished this game, and was goofing around failing to publish it, Erika Svanoe designed and published her Marrying Mr. Darcy. It is a fine treatment of the same subject, going into more detail, and it seems to be doing well commercially. (I knew this idea would work with Janeites. I was just late. BAH!)

It’s interesting that MMD has many of the same mechanics that I had put into JAG at one point, but I took them out when I playtested age 30-40 non-gamer women. That demographic was fundamentally bored with anything involving points and scores and mechanics. In the end I took out just about everything game-ish and reduced the experience to the simplest possible set of tools that put players in the strategic conundrum I described above. JAG is an extremely simple game, whereas MMD rightly deserves to be on the shelves at game stores. But if Chwe’s theories are correct, it’s the strategic tension that drives the interest, not the mechanics. Both games ought to be entertaining, through different avenues. I guess you could say that my Jane Austen game is more of a storytelling game, whereas MMD is more of a Eurogame treatment. If Chwe is right, then both treatments should be interesting to fans of Jane Austen, just in different ways, and possibly for people at different stages in life, with different levels of tolerance for fiddly game mechanics.

In any case, here it is, published, finally: The Jane Austen Game, a simple storytelling game for 3-6 players. Designed with Charlene Volk; art by Jane Minowa and Grace Vaitilingham. Available at GameCrafter. My thanks to Charlene for helping to finalize a fun yet extremely light design, to Jane for her beautiful portraits, and to Grace for her elegant layout designs.